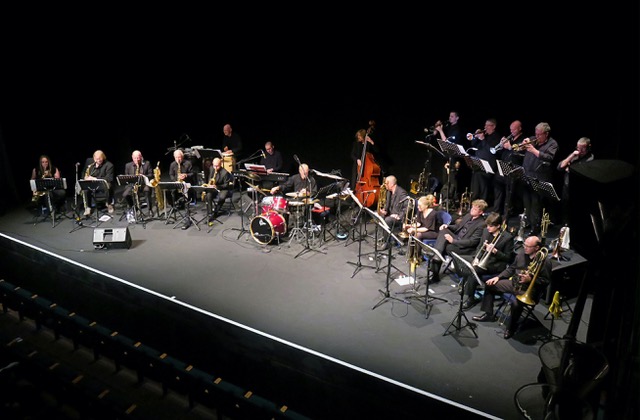 Since its early days in Stockport,that band played host to quite a few of Kentons ex side men.These include Richard Torres, Shorty Rogers,Bud Shank,Bill Perkins,Charlie Mariano,Bob Burgess,Jiggs Whigham and bassist John Worster. The aforementioned were part of a 4 day convention which the Shades of Kenton hosted at the Birch Hall, Oldham in 1987. The band also appeared at the Barbican in London along with The Forum Theatre at Hatfield in Hertfordshire,Brecon Jazz Festival, Llangollen Jazz Festival and Edinburgh Jazz Festival whilst having residencies at the Alma Lodge,Stockport and The Birch Hall,Oldham.

As the years went by Ivor Deach took over as Music Director and the band played at various venues whilst keeping the residencies in Stockport and Oldham. In 1998 an album (Adventures in Time) was recorded with the band now known as the Shades Jazz Orchestra. The band continued with various personal changes until around 2011. After the death of Ivor Deech, Dave Tyas who has played drums with the band since 1983 got a call from Pam Deech, Ivors widow. She offered to give Dave the entire Library of the Shades Jazz Orchestra in order to keep Stans music alive and the music performed.

In 2013, Dave reassembled the band with a strong line up of personel in order to keep up to the rigorous demands of Stans Music. The band went into regular rehearsal to get a good core of Stans music together up to concert standard. Dave believes in chemistry and teamwork and the current line up shows this. In 2016 the band played at Wigan Jazz Festival to great acclaim as there were many Kenton fans there whom were ecstatic over the bands electric performance. By this time the band was known as the SK2 Jazz Orchestra.

Dave is often asked why SK2? The answer is simply Shades Of Kenton 2. This is because of the founder Music Director, Ernie Eyes, who’s endless and tireless work put the project together back in 1983. Ernie was a Kenton addict and he was a hard taskmaster with band rehearsals and you had to give 100%! Yes he could be ruthless occasionally, but the result of it was a very powerful band which coped with all manner of arrangements by Hank Levy, Bill Holman, Marty Paiche to name but a few. Because Dave feels he has the DNA of the band at its insception he feels he wants to keep the momentum provided by Enie alive and keep Stan’s music being presented and performed often.